The Ravalli County Weed District Posted some information about the spread of Rush Skeletonweed on their Facebook page that sparked a flurry of questions on my page when I shared their post.   I will answer some of those questions here.

2.  We now have this noxious weed in Ravalli County and have learned a few things about how it spreads and our control options.  First of all if you hand pull rush skeleton weed the plant sends out lateral runners and spreads faster as mentioned above.  I have included the Ravalli County Weed District photo of the treatment area from 2014 ( 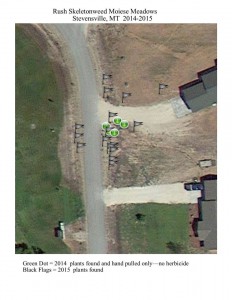 green flags) and 2015 (black flags).  The weed district could not get permission from the landowner to spray so they pulled the weeds instead and monitored the area.  As you can see in the picture below the pulling increased the spread.  Our best treatment options at this time are chemical and biological control.  Four biological control agents have been released for control of Rush Skeletonweed in North America: a mite, a midge, a rust, and a root-feeding moth (Bradyrrhoa gilveolella), soon to be released in the state of Montana.

3.This noxious weed can be a serious threat to wheat farming since it will spread from undeveloped areas into crop fields. Rush Skeletonweed can foul up harvesting machinery and contaminate the wheat crop. Rush Skeletonweed will also reduce crop yields on farmland by aggressively out-competing for nutrients and soil moisture.  In Australia, competition from Rush Skeletonweed reduced wheat yields by as much as 80 percent, resulting in estimated losses of more than $35 million.

There are several great resources for more information which I am listing below.  If you think, suspect, believe etc. that you might have this weed on your property please call the Ravalli County Weed District (406) 777-5842 or Landsmith Enterprises (406) 239-4195 for definitive identification, control options and help finding resources.  Let’s eradicate this weed in Montana and prevent the spread of Rush Skeletonweed.